OPINION: Why Africa's leadership is failing to uplift the continent and its people

The problem with African leaders is that they talk too much. This is why they fail to act on their intentions.

I’ve heard a lot of inspiring messages from many African leaders about how they plan to transform the continent, and its people, from beggars to equal partners who can make their own decisions about their own destiny. They have ambitious plans on taking back Africa and its natural resources, so that Africans can benefit from its own wealth instead of being exploited by outsiders.

I am convinced that some of these leaders have good intentions and they are genuinely committed to making these changes. But, most of these ambitious plans will have a major impact on the status quo, i.e. Western dominance, colonialism, imperialism, or whatever name they wish to call it.

My advice: If Africa has to succeed, it’s time for its leadership to stop talking big and tough about how they will uplift the continent at the expense of the more powerful nations. If you have done your home work, then start acting and stop talking. Just do the right thing at the right time.
By Alpha Bah at January 07, 2018
Email ThisBlogThis!Share to TwitterShare to FacebookShare to Pinterest

Family news: Proud moment - Our daughter Fatmata (Binta) Bah is the proud recipient of the Middle School Ambassador award for 2018 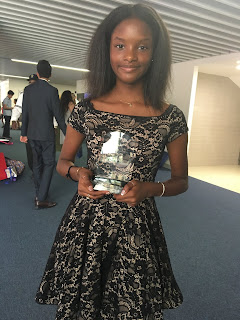